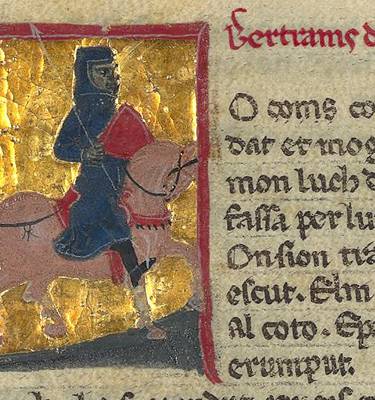 Occitania is the cultural and linguistic area where today people still speak, write and sing in Occitan. A Romance language derived from popular Latin, Occitan is spoken or understood by about seven million people from the Atlantic Ocean to the Mediterranean. In the Périgord, more than  half of the inhabitants say they speak or understand this language.

In the 12th century, thanks to Bertran de Born, lord of Hautefort, Arnaut Daniel, Giraut de Bornelh or Arnaut de Mareuil, the Périgord was one of the most active centres of lyrical poetry of the Troubadours. Spirit of courtesy (Cortesia), art of loving (Jòi), personal merit (Pretz) and equality in the respect of differences (Paratge) are some of the values of this poetry which enchanted all the medieval European courts.

Numerous examples of the richness of Occitan heritage exist in th area, such as dry stone huts, the chabanas (sometimes wrongly called "bories"). Around 1850, inspired by this brilliant heritage, the Félibrige movement began to revive literature in the Occitan language. The work of one of its founders, Frédéric Mistral, was awarded the Nobel Prize for Literature in 1904.

Occitan today in the Périgord Noir

Today in the Périgord, writers, storytellers, singers, teachers and the media are reviving literary and artistic creation and bringing the Occitan language of the 21st century to life by bringing it into the modern world.

Newspapers and magazines are published entirely in Occitan (Òc Tele, Paraulas de Novelum, la revue du Bornat dau Perigòrd...), columns appear in local newspapers, radio programmes are broadcast in the language (France Bleue Périgord, Radio Bergerac 95, ...). Finally, throughout the department there are about thirty workshops and "cafés oc" to learn the language and discover its culture, in particular in Vézère Périgord Noir in the villages of Condat-sur-Vézère and La Dornac.

Since 1903, every year, several thousands of people gather to celebrate the Occitan culture during the "Félibrée" organized with the association "Lo Bornat dau Perigòrd"

This great event, open to all, includes a procession of traditional groups, a meal, shows and events. In 2019, it took place in Périgueux on 5, 6 and 7 July.