Examples : Hotels, Restaurants, Activities
Home / Our Towns and Villages / Villac - English
-A +A

From Guern and Escaleyrou limestone we pass to Charpenet coal sandstone, then to slate schists of a greenish blue ...

The commune is often referred to as "La Rouge" because of the use of red sandstone in its architecture. The commune is surrounded by particularly extensive forests criss-crossed by footpaths. The dense woodlands are also inhabited by mouflons.

Also called " Little Collonges la Rouge " for its typical buildings, it has the particularity of having the only church registered with the MH built in red sandstone in our area: the church of Saint Wast. It is said to be built from the remains of the chapel that was annexed to the castle.

La Pierre du Bénitier, dug in the shape of a trough and equipped with a gutter, is situated 1500m from the village at the place called Le Chalard.

The Sudrie Cave (MH) can be visited on request by contacting the association "Les Amis de Villac".(http://www.lesamisdevillac.org)

It is also a village rich in small treasures: wells, wash houses, and ironwork. 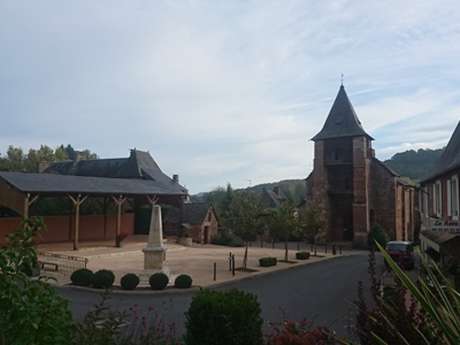